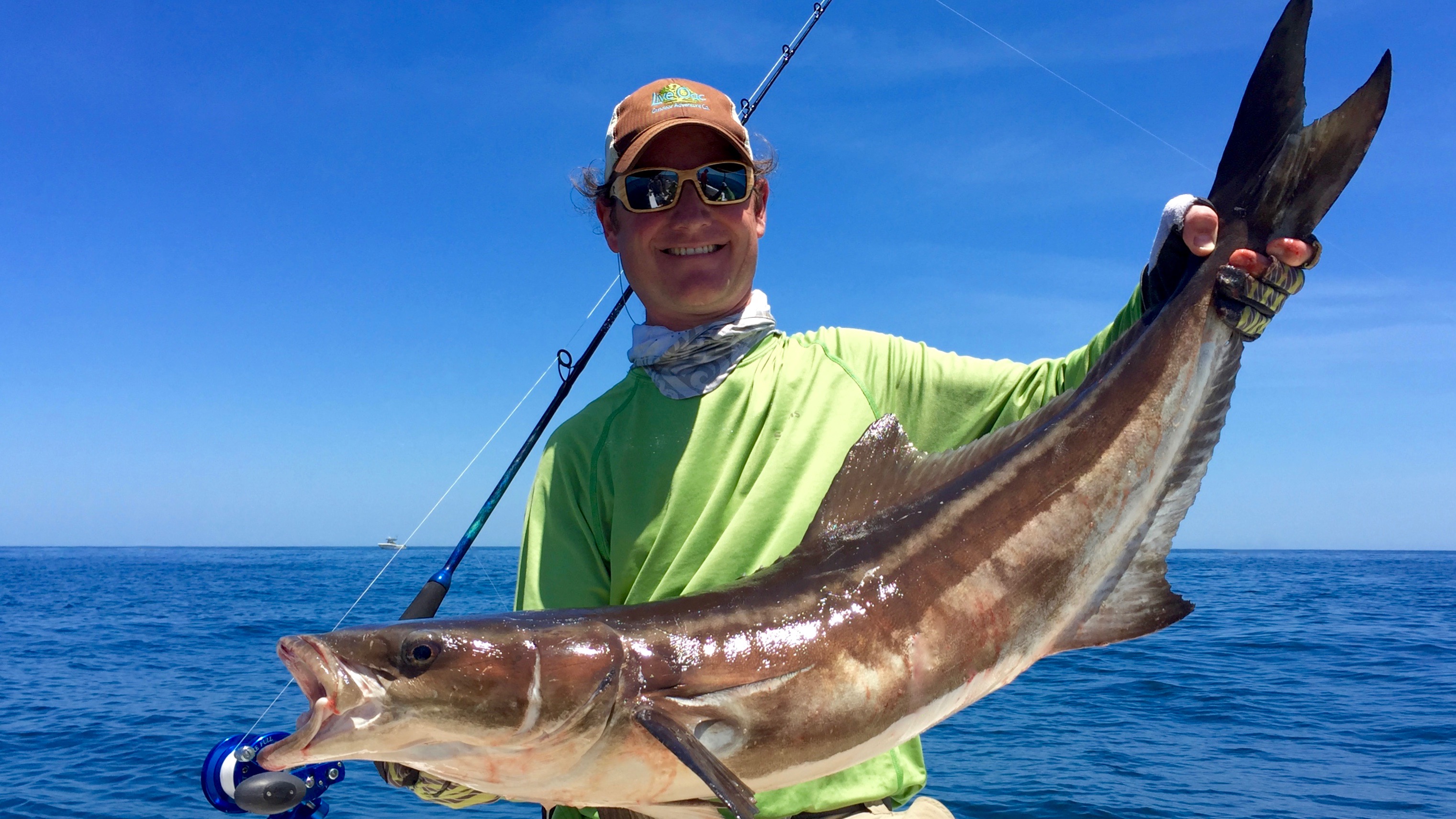 WOW are we lucky! Hilton Head is perfectly situated along the Southeast US coast for Spring cobia fishing. We have a couple amazing opportunities for cobia fishing just out Hilton Head’s front and back doors. Let me explain:

The Hilton Head area has historically been home to one of the largest inshore Cobia spawns on the southeast coast. Between April and early June, countless “brownies” move into warm inshore waters to spawn. The smaller males (typically 15-30lbs) shadow females of twice their size, hoping to get lucky and pass their genes on to the next generation. They often gather around tidal rips on sand bars and other significant bottom relief where currents vary, giving them an opportunity to ambush baitfish while they snack before or after spawning.

Fishing boats will line up along these current rips, anchored up with lines running behind in the moving water, hoping that a Cobia swims past and inhales their bait. Live menhaden and “greenies” (threadfin herring) are par for the course, with eels, squid, crabs and chunked bait of many sorts also in use. The Cobia’s arrival is just around the time of a massive influx of smaller sharks like Atlantic Sharpnose, and the sharks greatly outnumber the target species. Expect a high shark to cobia ratio, since they eat the same stuff.

Hilton Head’s inshore Cobia fishery is second to none in the Mid-Atlantic. to the north and west of the island is Port Royal Sound, a huge natural harbor that’s the confluence of many waterways, including the Broad River (and others). These waterways contribute to the massive flow of tidal waters, in and out, twice daily, moving food between ecosystems on a truly giant scale. Some areas of the Sound are more than 60 feet deep, a significant figure considering that most of the ocean side of Hilton Head Island is less than 10 or 20 feet deep for the first few miles out.

This deep natural harbor attracts so much life, as it has perfect conditions for microscopic plants and animals (“plankton”) to flourish, and these form the base of a tremendous food pyramid. At the top of this pyramid you have larger predators, like dolphins, sharks, humans, and big fish like Cobia. Some predators are local, year round residents, and others visit at certain times of the year, including Cobia, who arrive in mid to late Spring to spawn in the comfortable conditions of the Sound. Port Royal Sound and its largest tributary, the Broad River are well known as a premier spawning site for Cobia.

As an added bonus, just off Hilton Head Island on the mainland sits the Waddell Mariculture Center, operated by the SC Department of Natural Resources. Here, scientists work to better understand our local Cobia population (and other species, such as Red Drum) and are working to support that population’s future.

It’s no secret that the Cobia travel inshore during their spawning period. Large females, full of millions of eggs, are seen (and caught) traveling the local waters with a male escort, or two, or three…. When these egg laden Cobia are caught and killed prior to their opportunity to spawn, it obviously decreases the number of eggs successfully released and the number of Cobia entering the next generation’s population.

A dramatic decrease in the inshore Cobia population has been observed during the last few seasons. For this reason, Captain Blair and Live Oac have made a voluntary decision to catch and release all inshore caught Cobia. It is our hope that if local fishermen limit our take on this important species during the next few seasons, we will see a natural rebound of the population. We think this is in the best interest of the Cobia, the recreational fishery, and the future of this great resource. However, we don’t disdain or look down upon fishermen that do choose to reasonably harvest Cobia. We took a similar approach a couple years ago after an extreme cold winter devastated our Spotted Sea Trout population, and voluntarily released the few trout we caught thereafter, until the numbers began to show recovery. Finally, this year, we’re seeing plenty trout and lots of good sized ones again. Let’s hope for the same with Cobia.

Off the ocean side of Hilton Head Island is something else truly amazing: the Betsy Ross Artificial Reef. This is a huge swath of strategically placed structure including boats, NYC subway train cars, military APCs and such which are now covered in marine life. The position of this reef is such that an unbelievable amount of Cobia appear in this area during the spawning season. As far as I currently understand it, these Cobia are a distinct genetic population, separate from our inshore Cobia population (indigenous to Port Royal Sound). This group of fish seems as healthy as it’s ever been. Anchor up around the reef during the right time and you could literally be swarmed by Cobia.

The reef is a veritable “Cobia Club Med” for a few weeks in spring as it fills with spawning Cobia, so where they go to hookup, we go to hook UP! It’s a bit of a ride out to this spawning Cobia “resort” but it’s well worth the effort, as long as the conditions are favorable. In addition to Cobia, there are big schools of Spadefish, Black Sea Bass, large bull Redfish, Bonita, and of course plenty of sharks. While we have pledged to release all inshore Cobia, we are still harvesting a reasonable amount of Cobia offshore. Catch and release is encouraged, but we don’t mind bringing home a fish or two. We also recommend taking only a smaller male Cobia and letting the egg filled females swim for a chance to procreate. A “small” male will likely feed a family many times over, as these are big fish. (33″ is the minimum length of a “keeper”)